About the Dark sow

”Could you imagine anything more mysterious than the Dark sow? Always and everywhere present, listening, perceiving, without being heard itself. The wisdom, acting in silence, that is her secret. The great forests, the old log houses comprise the natural habitat of the Dark sow and no one in our time has seen her more often, no one has captured her essence better or more justly than the whimsical Verner Molin.”
Responsible for the lyrical presentation is Aron Borelius, known amongst other things from the book of Rättvik’s culture chapter. The lyrical presentation was first published in 1960 at the museum of Dalarna for the Dark sow foundation’s first artwork exhibition.

The notion of the Dark sow in the general public more widely expanded in 1956 when I launched it as a souvenir from Dalarna. Verner Molin and myself then agreed to lay out the grounds for the Dark sow foundation that over the years has expanded to the substantial collection of artworks that it is today, that today is also disposed by the cultural center(Kulturhuset).
But the Dark sow itself is a considerably older notion. Even though it was not until the past half century the Dark sow appeared in common terms she has long manifested in folklore. Chronicles connected to the Dark sow dates back to the 20’s , where she can be found in the dialectal archive in Uppsala. These chronicles emerged from several parishes around the southern part of Siljan, such as; Rättvik, Leksand, Djura, Gagnef, and Ål. In there the Dark sow is portrayed as a being applied in the concept of scaring children from roaming the streets at night.

Beware of the Dark sow, or she will devour the streets you walk on!
But the Dark sow is also described as an unusually large black hog or as a log not wanting to catch fire in stove. As well as a synonym for female genitalia in the expression; ”sitt å grena å vis marksugga” (roughly translated; ”sitting there spreading your legs and displaying your private parts”)
In an essay from 1979 at the Institute of ethnography at the University of Stockholm, Catharina Sack treats the subject of the Dark sow in an article called ”Från folktroväsen till turistsouvenir”.
(”From a mystical being of folk belief to a tourist souvenir”) Ethnologically she refers the Dark sow to the category of pedagogical fictions.

From the collections of the Nordic Museum she quotes a statement from Rättvik: ”The Dark sow and no one else stood before him. Knees shivering, teeth chattering he came faltering through the front door, terrifyingly screaming: Dark sow!”
An 88-year old man from Rättvik tells a story from his childhood when he was playing on the kitchen floor with his sister.

”I remember it like it was yesterday, even though 80 years have past. Mother walked resolutely towards the door and called; please enter Dark sow! The energetic ambiance in the room all of a sudden came to a halt and the blood froze in my veins, chills went down my spine, eyes starring and my legs shivering. I grabbed my baby sister’s forearm and tried to reach the turn-up bedstead infront of the bed. I do not recall seeing anything in the doorway but everything became dead silent in an instant”.
According to Catharina Sack the Dark sow in people’s minds symbolizes the darkness in darker times.
To Verner Molin the Dark sow did not represent anything frightening but instead he sees it like somewhat of a conductor of life, a mental force, a human charm, he was trying to capture and interpret figuratively into an illustration. In an art encyclopedia there are som thoughts about this written by himself were he suggests this version of the Dark sow.
”In a situation involving two people and a third person comes into the picture a shift takes place”
”A strong mind can affect the mind of another” ”A sense of delight or discomfort that in a split second spreads throughout your body -should not this be captured, transformed, and conveyed in an illustration?” His Dark sow eventually leaves the obscurities of the forest and manifest and performs at the ”Theater of life” or at the round-about at Karlaplan.

The Dark sow distinctively separates itself from the rest of the souvenirs at the shelfs of the souvenir shops, however it is technically distantly related to the old folksy play-toy ”Knikåkall”
It has appeared in the most separated and distinctive contexts, e.g. serving as the prize in races of night-orienteering, at the swedish students’ midsummer celebrations in Paris (where it was said to symbolize the female soul), as a cabaret character etc. And due to handicraft it has travelled the world both east and west.
In the 50’s the press discussed the possible relation between the Dark sow and the Mumintrolo.
Even though some congeniality in a whimsical nature is apparent it is today established that it is a case of two parallel phenomena set apart by the Bothnian Sea and the years of war.

The author and Academician Werner Aspenström has denominated the Dark sow yet another dimension in ”Författarens djurbok” (the author’s book of animals). Here he writes about animals living and acting without having a legitimate zoological claim. Amongst these, the Dark sow is to be found, among beings like the unicorn and the yeti.
”In cities and ablaze urban centers it is less commonly found, but far from extinct. Even the brightest lit up places or things cast great shadows. Most commonly the Dark sow is found on the countryside, in outhouses, barns, sheds, attics, hay-lofts, and in root cellars or simply behind the cottage corner or in the fringe of a forest, however always in the vicinity of people and there abodes, similar to the nettle. Generally it sits, motionless, almost broodingly, face turned towards us, like it was searching for eye-contact”.
Maybe it feeds on desire, gloom or mould, according to the author. However a mouth is still to discover; ”so maybe it feeds with the eyes”

According to Catharina Sack we can sum up that the Dark sow ”has unlike many other beings lived on through out the years, still occupying people’s minds today”
And to conclude the tale of the Dark sow quoting ”Det sällsamma Dalarna” ( The funny-peculiar Dalarna) by Jan Gabrielsson; ”Even the most joyous of souls has its dark nooks, not the least the soul of Dalarna”
Birger Eriksson 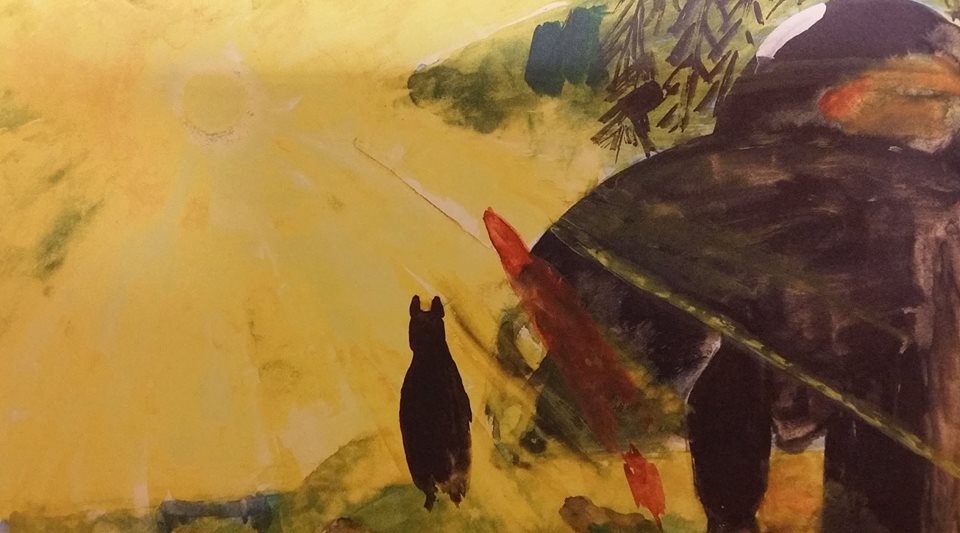